Well, I haven’t written anything for a while. I just don’t have anything to say.

I realized I never wrote up the Confederate League timeline that I wanted to.

Well, I guess I don’t really care to do it now.

I just haven’t been doing a lot of drawing lately.

EDIT: I do have something to say. I feel like I’m not caring anymore. Like I don’t get how J gets the motivation to keep at it. I’m here just cuz J’s doing it. This site isn’t going anywhere fast.

So, I bring back “Real Life Random Acts of Stupidity”. This comic and the next few are 95% real events. The dialog may have been tweaked a bit to be more clear.

I’m using this slightly different art style for all “Real Life Random Acts of Stupidity” to emphasize the fact that the characters that appear in these comics are not the J-san, D-san, Sam, etc. that appear in other comics, but actally the real us. (Boy, that sentence sounds weird.)

So anyway, RL-RAoS is back! 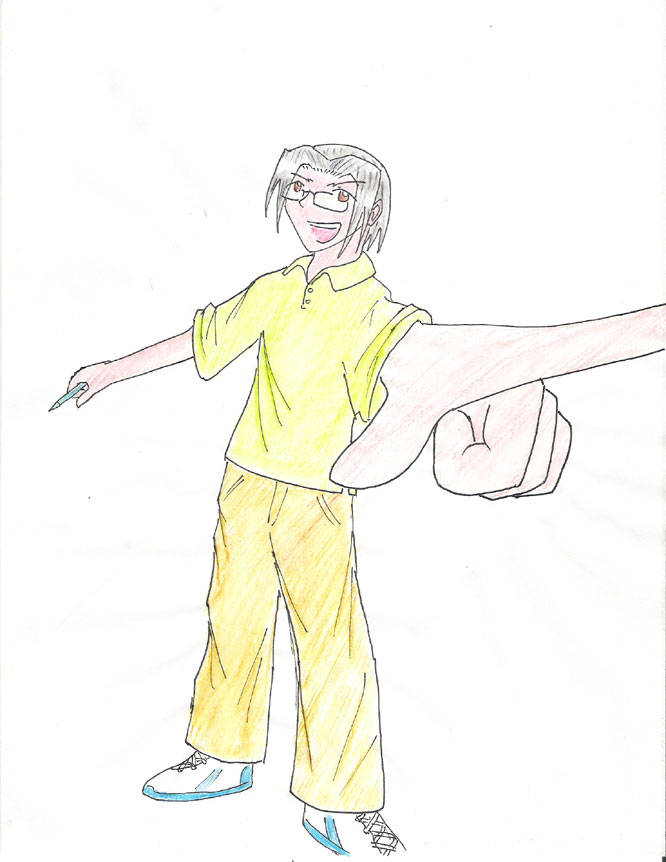 Hey there! So I tried to do something with the watercolor colored pencils that were used in the “original version” of this comic (scroll down in the rant to find it). This time, I used pen to outline the drawing; last time I used pencil, and pencil dust got into the watercolors. Unfortunately, I neglected to draw the picture on thicker paper, so the paper warped when I applied water, making scanning difficult. Ack! and I also forgot that D-san’s eyes are colored purple. No wonder he looks so strange in this picture…

Caption for this drawing “Kill-rape-pwn!”, D-san chess slang for “Quick! Take that piece and own!”

Today is the first time in a while that D-san has updated before me.

So, I tried drawing actual noses again, as in actual curves instead of the shadow. I don’t know why exactly, but I had a lot of fun drawing this comic.

There’s a hint of Korean manga influence in the fourth panel, probably from the face shape.

On another note, I was seriously tempted to throw M&Ms into the darkness once when I was in a gym at night, but I think people would have beat me up.

Wow. That was really incoherent.