[12/31/2007] Happy (solar) New Year, everyone! To kick things off in the new year, we’ve got something old — a comic I drew way back in October for a chemistry homework assignment. We were supposed to explain, with pictures, whether Hydrogen Fluoride (HF) or Hydrogen Iodide (HI) had a higher boiling point. Of course, I took this chance to bring out the ever-awesome (in my eyes, anyway) concept of moé anthropomorphism. Unfortunately, I don’t think it did a particularly good job of explaining why HF has a higher boiling point than HI. The original version of the comic can be seen here.

At any rate, Happy New Year folks. Enjoy the weirdness.

Derek’s too lazy to rant or update, so I did it for him. The update, that is.

So, first a bit of background. openCanvas is a nifty little program, that, in its earlier incarnations, allows people to connect with the magical powaa of the interwebs and do something called “paintchat”, which is basically drawing on the same picture over the internet. After Derek and I figured out how to do this (with a bit of help from this webpage), we tried doing so. Hence, we get what you see above.

A few things before I explain what the heck is happening in those pictures. First, a caveat: Derek had a tablet. I didn’t. This may partly explain the difference in quality of art, though I didn’t do too bad a job using just a mouse, if I do say myself. Secondly, the actual openCanvas program can be had here (right-click and choose “Save Link As”) if you so desire. It may help follow along with the next thing, which is the event files for the first session and second session. Basically, they’re recordings, sped up, of Derek and me painting. Now, onto the actual art:

First Session: Our first attempt. My lack of skillz with the mouse (or in general?) is visible. Derek tends to draw faster, so I didn’t get as much done. Not sure what the girl in the middle is about. The ship in the middle was drawn by Derek; the thing in the lower-right hand corner is my biscotti-and-waffle parody of it. For those of you following along with the event file, the comment “Nice Boat” is a reference to a recent internet meme. Can’t really explain it concisely, so I’ll refer you to Tokatu’s rant here (scroll down to where it says “Nice Boat!” in bold).

Second Session: This one contains a lot more randomness. Those of you watching the event file may notice Derek Drawing a ship, which then explodes and is deleted. Meanwhile, the picture randomly turns dark and inverts its colors. That would be me trying to figure out which layers I’ve painted on. Anyway, once again, in the corner we have Senator Käska. After Derek redesigned him with a prominent ahoge, I’ve always been tempted to draw him as a spazzy asshat. Much like a certain other character who says “MAHO” a lot. The little white things behind Käska are dango, as seen in this rant. The event file contains a short period in which a profusion of them are generated all over the picture. At this point, I drew Hungry Hungry Käska to take care of them. The two girls are ME-tan (left) and XP-tan (right), two of the most commonly seen OS-tan.

My god, there’s a lot of links in that rant.

Nothing I really wanna say this time around. I’m in Hong Kong, coming back in two days. Quick trip this time. My parents and siblings are going to some resort in Malaysia, but for me there’s no better resort than home sweet home. So I’ll be coming back early.

Prolly won’t get a chance to go anime merchandise shopping. Tight schedule with the short trip. Hell that’s why I’m running behind with this update. Even so stuff happened and funds are tighter than I’d like so I prolly wouldn’t buy much aside from a few gifts…

Working on the part one redrawing at the moment. Nothing more to say really. 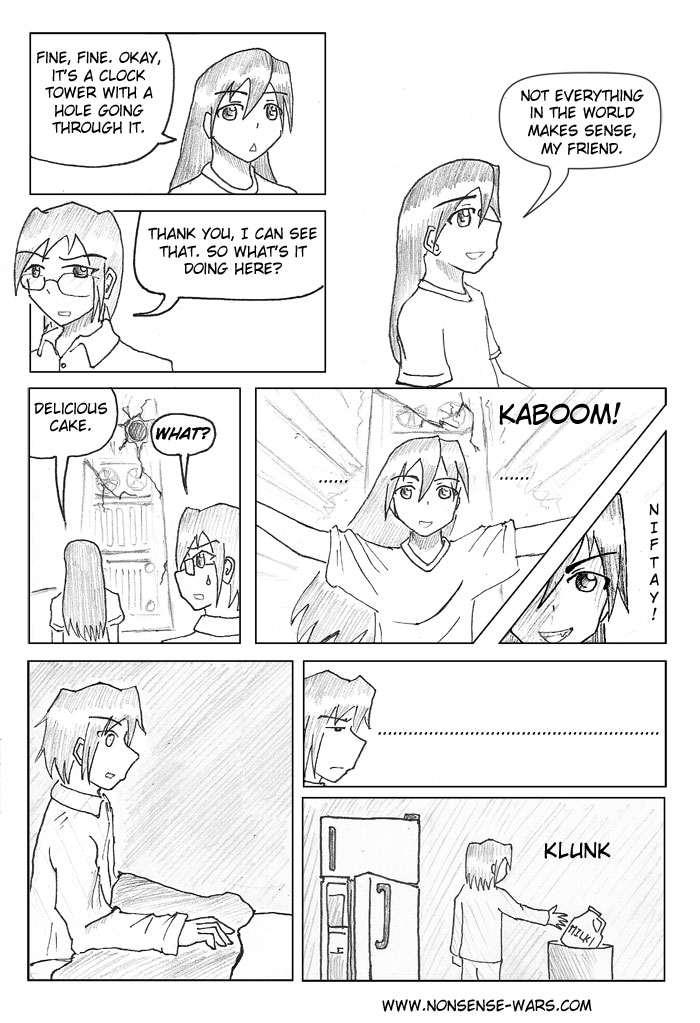 I have finals right now. But I drew this (well, except for the shading) before they started. So we get a comic.

Too bad the quality is questionable. As Derek said, actively not-thinking doesn’t seem to be working. Also doesn’t help that I can’t think up plots.

Maybe I should just go back to my old pattern of 4koma, which occasionally happened to fall as a plot, while still being funny. Like, this comic could probably have been done as 2 or 3 separate 4-panel comics, which would individually be funny, and still convey the same information. Hmm. Maybe I’ll try that.

At the bottom of the sheet of paper is a note, “rant: fridge?”. I think what I was thinking was that most fridges I run into these days are the top-bottom style, with the fridge and freezer units stacked on top of each other. I wonder why side-by-side isn’t as popular. Maybe there aren’t too many tall, narrow things people want to put in their fridge.