Nothing to say today. 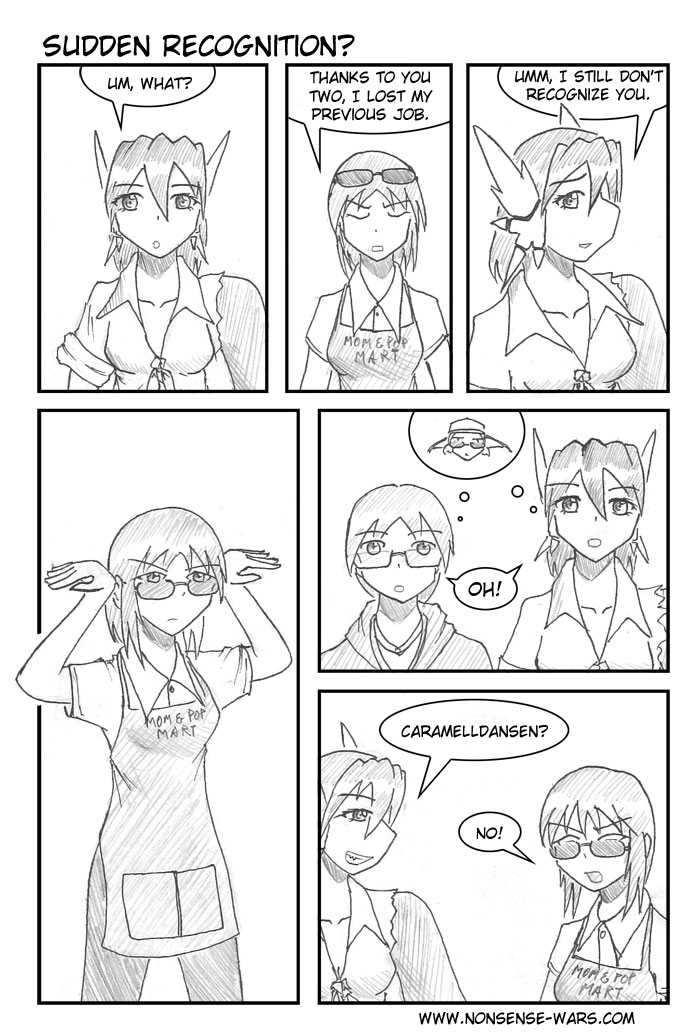 [7/23/2008] And, welcome to the second away update! This rant was written just minutes after the previous one (w00t, linking to an update that didn’t exist at the time of this writing!

Caramelldansen. The Lesser Demon’s last line in today’s comic was originally going to be “UA-UA-NO-O~!”, but I ditched it. Ah whatever, you can pretend it’s there. The last panel doesn’t even have to happen for the plot (?) to work…

Anyway, on to some other stuff! Dark secrets ahead~! (?)

So, in a past IM conversation, Derek told me something to the effect of, “I like the little fuzzies in the Lesser Demon’s ears.”

Thassright, fuzzies. (he actually did use that word. I thought it was kind of cute.) Not sure what they are. They aren’t a particularly original thing anyway — a lot of animal-girls have them. Actually, I have to admit that the ears on the Lesser Demon were basically lifted from this character (I have no explanation for the filename. That’s what it came as (though converted to jpg from bmp (!) for internet use).) I was trying to avoid doing the exactly the same thing, which is why in the early comics the Lesser Demon didn’t have the fuzzies. I guess I just gave in and added them at some point.

Well, you know what they say of things that aren’t broken…

So, in last update‘s rant, I mentioned “J” style characters (crazy and active) and “D” type characters (the “straight man”), in my half of Nonsense Wars, bascially creating your usual comedy duo. An interesting observation I made the next day: All of the “D” characters wear glasses, and almost none of the “J” characters do. (I could say all of them, but Grav’s under development. She might be another character type entirely.) Weird. 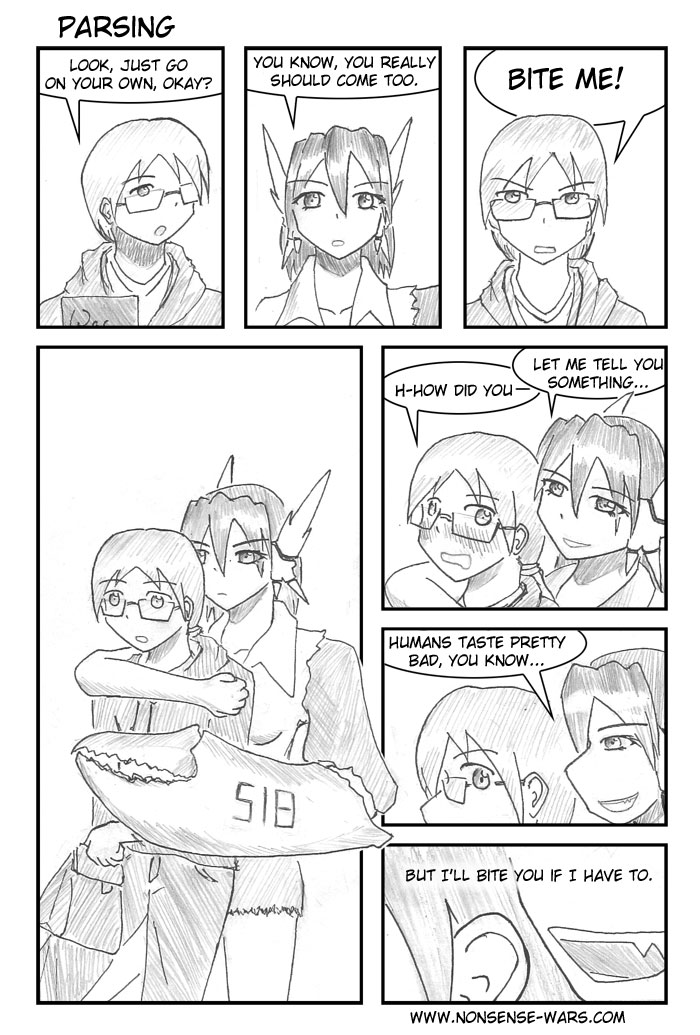 Crap, I totally ran straight into that pun without thinking about it. No, really, I mean it!

So, I’ve been waiting to do the joke in today’s comic for a long time. Basically, it was initially supposed to run something like this:

I thought this way was pretty awesome, though. However, it brought up one problem which I hadn’t really addressed: How much taller than is Unit 518 than Sam?

That’s right, taller. See, because of her wolf-feet, Unit 518 is digitigrade, meaning she walks on her toes. So, after some sketching, I determined that Unit 518 is about half a head taller than Sam. Of course, she’s bending her knees and ankles, so she could probably be quite a bit taller if she stood up straight.

Anyway, in an IM conversation with the real-world Sam, I articulated the thought that my half of Nonsense Wars fundamentally only has 2 types of characters, then blew up part of my observation so I could feel better about my characterization skills. Make what you will of that. The conversation (formatted for the web) appears below. As usual, kenocolin is me, and SmallestInfinity is Sam.

Anyway, I leave Thursday on a trip to Europe, but fear not! I have drawn updates in advance for the next two weeks! 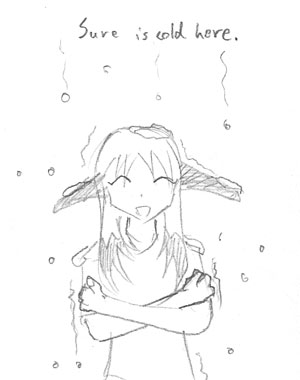 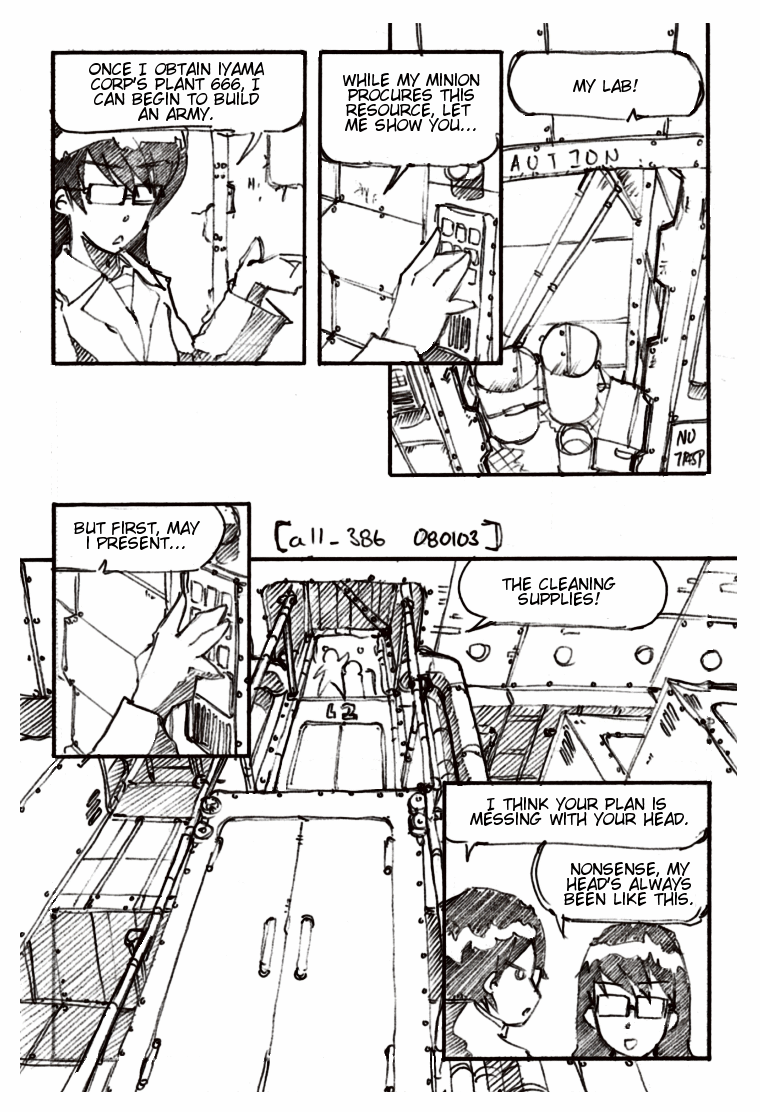 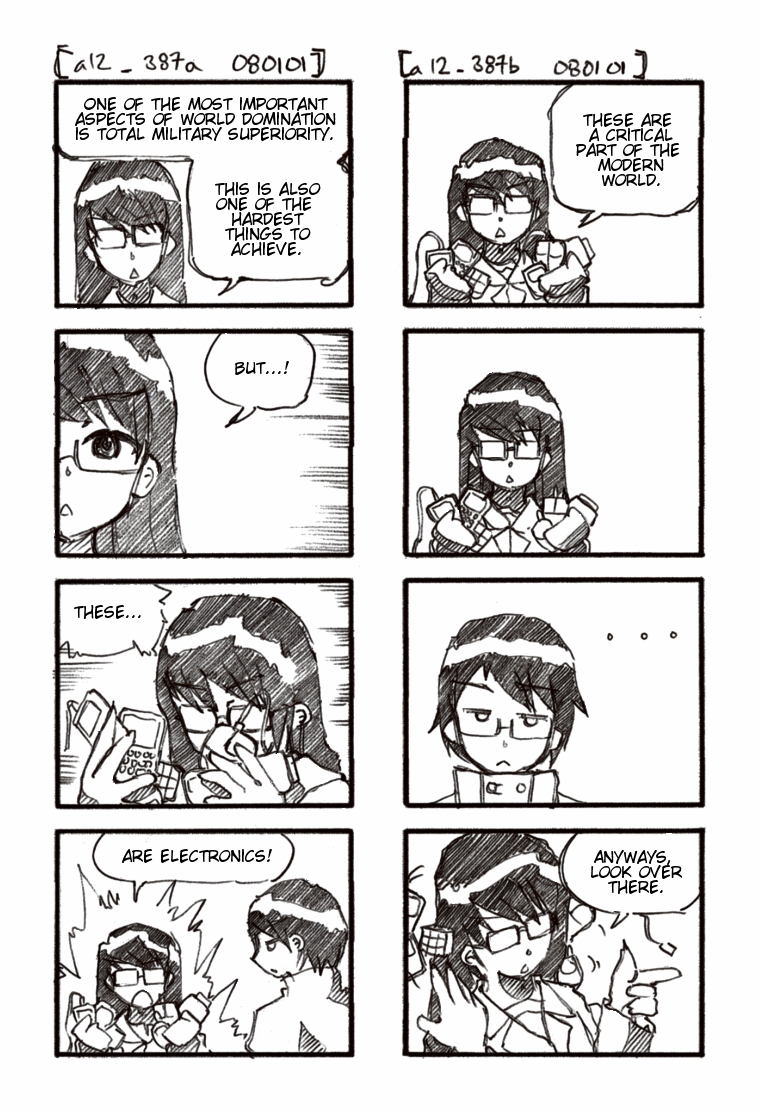 This update actually being written pretty damn early. Anyways, here’s two of two paintings I was doing last week and the week before that. It’s another “benchmark” painting if you will.

Highlights of this illustration over the one two weeks ago: I kinda pushed this red thing I like to do a little further; all the light areas are done with the same three or four reds whilst the dark areas are done with their respective blues, browns, yellows, pinks, etc. The darkest areas also all have a bit of the same red as well. Lineart is done a bit differently from the past few paintings; in that characteristically cyclic way, I’m back to doing linearts more or less the same way I did ’em in early 2007. It’s better though.

Ultimately I think lineart and painting (that background is a great example of lazy) are both slightly better than so-so, but the combined effect seems to have turned out pretty damn good. I’m tempted to displace Yuki as my “best” illustration on my DeviantART, but I ain’t done it yet. If you zoom in about 200-300 percent it actually looks pretty sick. In an I’d almost use it as a desktop kinda sick.

In general linearts could use more work, but so could the painting. I think it looks pretty nice the way I’m doing it now, but it’s really kinda “fuzzy” if you will. Lineart wise I’m going to try to start scanning comics and re-inking them digitally. It’ll be time consuming, but I have time and should be “stepping out of my comfort zone”. I hate those words, but sadly I think it’s true…

Anyways, that all for now.