Because I was totally hosed this weekend by work, my sister was kind enough to provide fillers. Yay sister~! 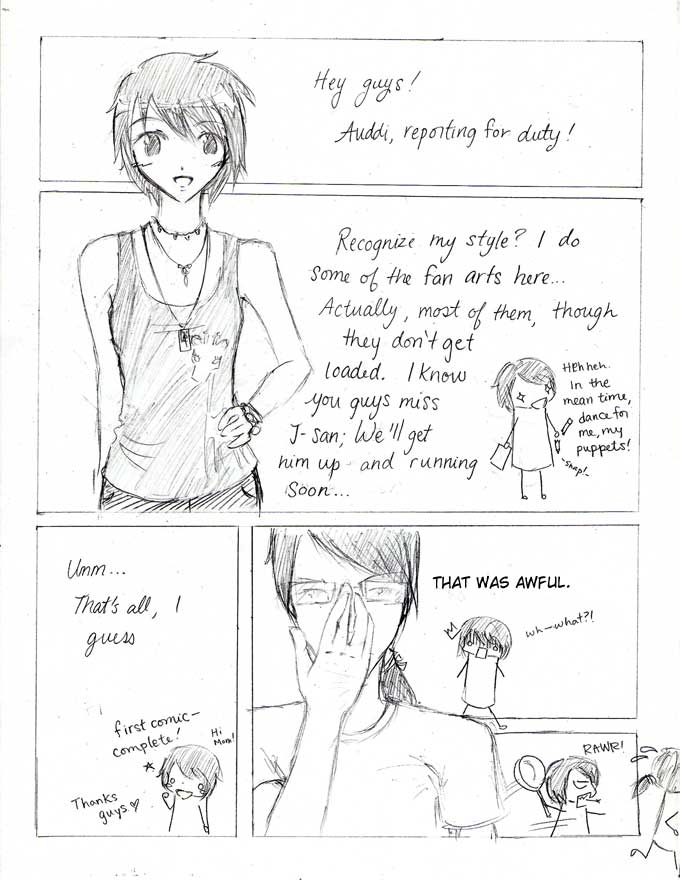 So yeah, this week I was hosed, so my sister provided awesome fillers! (She previously drew this filler here.) The concept behind the second one is like 3 years old by now; it was funny when we thought of it (we were fluffing a particularly fluffy pillow). I tried to get her to write the rant too, but she was busy.

So yeah, I’ve kind of been uninspired lately. Well, rather, I don’t have a particularly fine grasp of where I want the plot to go, so I should probably plan that out before it crashes *cough*Sandstorm*cough*. Yeah, that’s probably a good idea.

Ugh, first week of the quarter is done. Only another freaking ten to go. It really irks me how we have a whole four weeks of break in first quarter (ok, more like 1 week and then three weeks before winter quarter) and then absolutely nothing in the last quarter. Frankly, I’d rather have those four weeks in the last quarter; whoever thought of this dumb system was obviously never a student.

Having finished my first three problem sets hella early I finally got around to doing some drawing (prolly first time in like a few weeks). Fortunately or unfortunately it’s not any progress on the comic. I was doing some preliminary doodles for the series of ToV fanarts I’m going to do and it took me quite a few tries to turn out anything that didn’t look like crap. I feel like that doesn’t bode well…

Just while I was typing this, I noticed my TC4200 had these fancy lights right next to the Caps Lock and Num Lock keys to indicate when they are turned on or off. I never noticed this before since I never use Caps or Num locks. Battery life is also starting to show significant wear since I bought this thing 5 or 6 months ago.

I’ve nothing else to say. I tried twice to go on a rambling here but neither got me anywhere. I’m actually just reading some old entries here, so I’ll leave this be.

So as these things tend to go, I’m actually at my friend’s house writing this entry a day or two early. We’ve been playing Tales of Vesperia for the past six days and I have essentially done nothing else besides move a couple things to my dorm for this academic year. Another friend of mine who played this game before us reported that it took him something like 70 hours to complete it; we’re currently at hour fifty-something.

These Tales games really seem to get longer and longer as the series goes on. Symphonia was seriously a 40-hour game; Abyss, something between 40 and 50; but Vesperia is really pushing it now. At least it doesn’t lag like Abyss did.

I could have actually finished the game by now if I paid something like $200-250 upfront a couple weeks ago; Vesperia is currently only for the 360 and I don’t have one. It’s possible to get a used unit for something like $100-150 on ebay, but then the game still costs $50 and then there’s always taxes and shipping. I didn’t really want to pay for a console I’d only use to play one game (as I already effectively did with the freaking PSP and DS) so I held off ’til now.

I have a huge bitch with console gaming, but I think I’ll save that for another day.

Instead that $200-250 went to pay the difference between my old D830 and a new E6400, the latter on which I am typing this entry right now. The Dell E-Series machines were announced way back in like May or something, but I didn’t really consider switching machines again until less than a month ago, at about the same time I ranted about 15-inch laptops. Really it was a spur-of-the-moment kinda decision, but about a month later, I don’t regret it (and really, there’s not much I can do anymore anyways – I already sold the D830 two weeks ago).

The E6400 is a 14-inch computer, and though it’s widescreen, the extra inch off the width and depth (and the little bit off the height) really make it a lot more convenient as a laptop. Dell made a lot of big claims for the E6400 which might have influenced my impulse buy. The original advertised weight was 4.3lbs (crazy for a 14-inch laptop) but that turned out to be with a bunch of weight saving features: 4-cell battery, SSD, no optical drive, etc. The more practical weight is something like 5lbs; slightly below average in this class. Battery life with a 9-cell primary and a 12-cell slice was supposed to be in the range of TWENTY hours; I get about 5 on the 6-cell. Overall, it turns out to be solid for this type of machine, just not as exceptional as Dell would have you think.

Only extented use will tell if I’m really satisfied with this thing, but after two weeks of use, my thoughts on the good and bad (relative to the D830):

Primary benefit is the fact that it’s smaller and lighter – much more like a notebook than a desktop replacement. Battery life is a bit longer on a smaller battery, without really sacrificing any performance (not that I need much of it). The LED display is really bright when turned up and the colors aren’t as washed out. Backlit keyboard. It feels pretty nice to type on too: the keys don’t really have that much travel or feedback, but the back of the keyboard compensates by being hard as a rock. One more USB port, no more legacy ports – eSATA if you use Vista (but who the hell would do that). Very easy to access all upgradeable components; the entire underside is a single access panel. Fan also runs less and stays off completely while the computer idles.

Did I mention it looks hella good?

As I said before, the biggest fault with the machine is that it’s simply not as amazing as Dell would like to have you think. It’s just not that light and not that small. Widescreen machines seem to have a lot of “wasted” space compared to their standard-aspect counterparts. The bezel around the screen is kinda thick and you get like space around the keyboard and stuff to put speakers and the like. It’s kinda like most companies just don’t really know what to do with the shift in space. Because the LED display is also pretty thin; it seems a bit flimsier than the D830 lid and this is exaggerated by the fact that the latch is off-center to make room for the touchpad. Speakers are also a bit worse. “Tinny” if you will.

But it still looks hella nice.

Oh. The specs. It’s a 2266MHz P8400 (higher clocked, less cache, ultimately only a bit faster than my old T7300) paired with 1GB of PC6400 memory and a crappy 80GB HDD. nVidia NVS160M and a 1440 x 900 display which is, in my opinion, the sweet spot for a 14-inch monitor; I can actually run it at the native resolution and it looks very good. Most of the parts here are the cheapest configuration options for this machine; I only upgraded things that aren’t as easy to switch out in the future such as the LED display. I needed to keep the cost down since I’d be shelling out for this thing myself; everything else can be upgraded later if need be.

Anyways, my friend is taking a short nap right now, though I think I’ll wake him soon. We probably won’t finish ToV before classes start for either of us on Monday (insert sad smiley) so I’ll have to borrow the 360 and the game or something if I want to finish it on my own time. That probably means I’ll have to drag a TV or a desktop (with a TV tuner and monitor) over to my dorm in the near future; both options are going to be a pain.

Speaking of the dorm; I have a two-room double this year and it’s a MUCH nicer than the one-room double I had last year, not just in the sense that there’s a lot more room; the building itself is a lot newer too. I do miss having a sink in the room though, as well the single-person bathrooms found in my old dorm. Cafeteria is also kinda far away, which makes bringing food back somewhat difficult, but I think I’ll have my own fridge and microwave this year, which’ll be an improvement (spelling?).

So that’s prolly it for now; you can expect ToV fanart instead of comics in the near future. Probably a lot of them too. 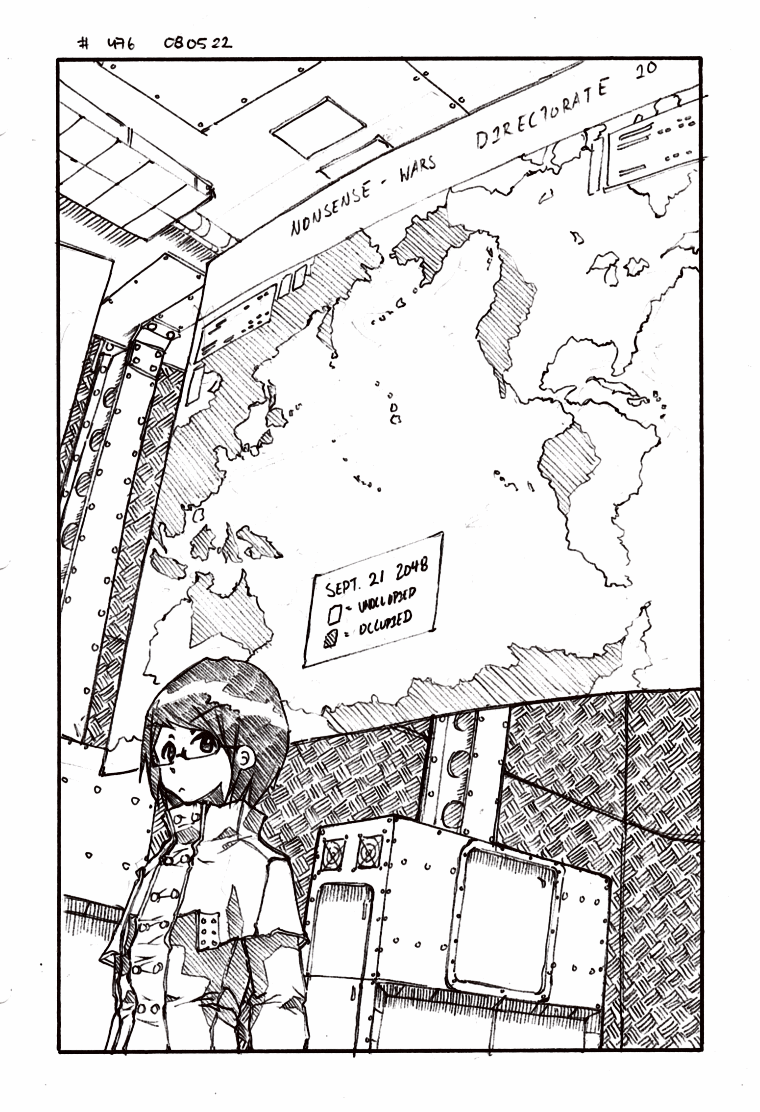 Totally forgot about this. Was going to write about the e6400 and ToV, but it’s late as it is (the time and the comic) so it ain’t happening for now. 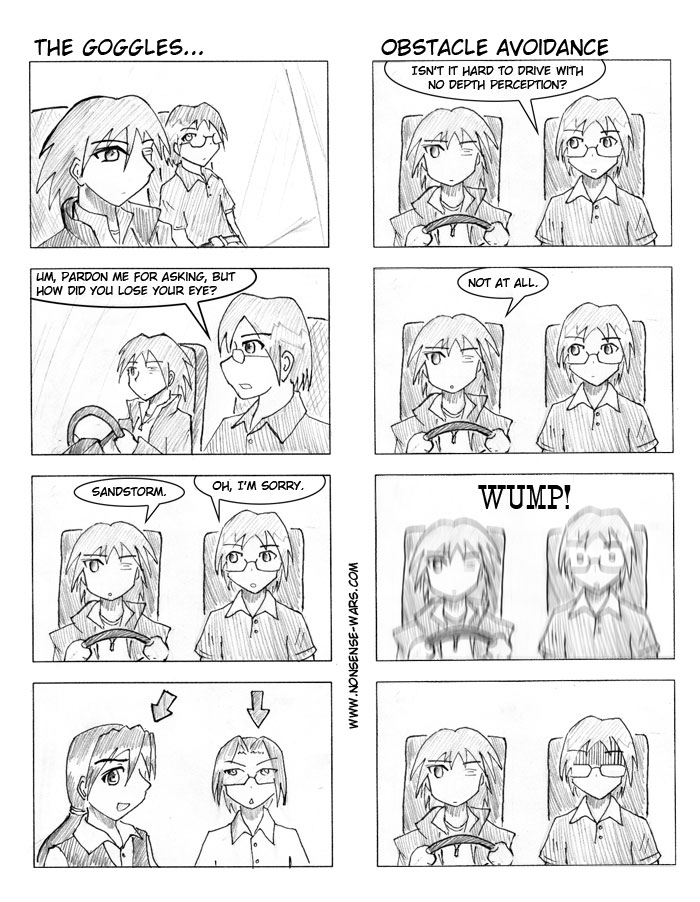