This comic actually happened while preparing for the con. Silly us, we didn’t think to print on business card paper or use special software, and so we cut them by hand on a paper cutter. That went as well as expected. We actually ran out of them on later days so we printed them as we went and cut them out with X-acto knives and scissors.

The con went pretty well, all in all. We were selling prints. We had brought a printer with the intention of printing as we went, but there wasn’t any power available for some bizarre reason. So the next day Derek rigged up this system to run the printer from a car battery, and we were able to print on the fly.

I’m not going to say how much we made, but suffice to say we doubled Derek’s expectations. Also, we only sold Derek’s stuff, none of mine~~

By the way, for you K-ON! fans, here’s a little something I made:

In the last entry, I commented on how the ToV/PS3 illustration represented what I was typically capcable of putting out these days. I then made a reference to how I thought I could make it linearly better with an exponential amount of effort. Well, what I didn’t describe was the criteria for what I consider to be better or worse these days, and/or how I thought I could improve upon these pieces.

One big factor in overall quality is lineart quality. I still maintain that it is harder for a good paint job to make up for a poor lineart than it is for a good lineart to make up for a poor paint job. That being said, I’d say lineart is somewhere between 25% and 50% more important. I don’t really consider lineart something I can improve too much just by hacking away at it, though. If lineart is bad, I generally feel the need to completely redo it rather than making incremental changes here and there. It’s possible to improve lineart by cleaning stuff up, but this brings amount like next to nothing in terms of overall global improvement.

So much of what I feel like I can improve upon lies in the paint job, and almost all of that lies in colors. When I was drawing ToV/PS3, I actually based those speakers next to the television on some speakers I saw online. These were made of wood… and mine turned out to be grey. Because choosing colors is really time consuming. It’s hard to get shit right and I usually reuse colors from previous pieces. A lot of colors from C080930 went into ToV/PS3 with little or no adjustment. So getting off my lazy ass and actually getting new colors would add to the piece(s).

Furthermore. there’s a lighting element. The ToV/PS3 has a pretty bland, hard light source, as do a lot of my other faster illustrations. Something like C090129 on the other hand, has a couple, and takes a bit more care to do. Taking into account the various colors of the various sources leads to some nice effects, and ultimately I think accurate lighting contributes a lot to the entire quality magnitude. The mixing of the various light source colors usually adds a fair amount of complexity to the to end colors and a good amount of detail here and there.

Many of the pieces which have held the best artwork position on my DeviantART account should (if I recall correctly) be pieces that conform to these standards. I wish I knew which ones had that distinction, but my memory is not very good; I know like the current best piece, DMG, Yuki, and so on have all had what I considered at the time to be good linearts, comprehensive color choices, etc. Yuki had a strange painting methodology applied, and even though I tried to move away from it, I don’t think it ditracts much from the piece itself.

So there you go, another mediocre-lengthed entry. I’m actually typing this at the booth at Fanime, and J has not gotten his update up yet. Tried to draw a comic yesterday, but I just can’t draw at the booth. Ok, that’s all for now. 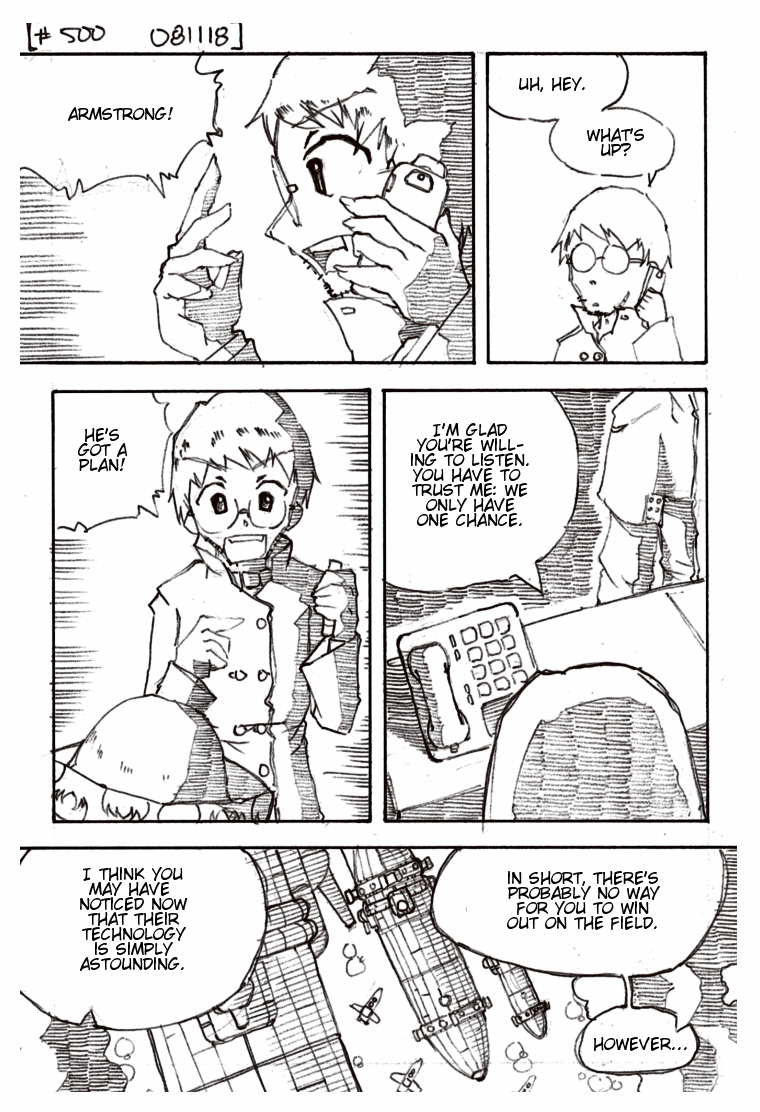 So, in order to get J to keep updating on a normal basis, I’m not updating until he does. So I just wanted to set that straight, in case the updates don’t move on a consistent basis from now on. Last week J updated but he made the update coincide with my update for the week before that, or something like that… at any rate, two updates today to make up.

The first is obviously comic 500. Except for the fact that it’s comic 500, there’s nothing terribly special about it. You can see the art in the form which it’ll basically take up through the end of the story. It’s taken a long time to reach this level of consistency, but here we are. Whoo.

So this was actually begun almost a month ago now, celebrating the announcement of ToV on the PS3 and ultimately for 8k pageviews on my DeviantART. Obviously I got distracted, both with work and Transport Tycoon, but I eventually got it done this week.

I’ve been meaning a long time now to rant about why I hate consoles. Everyone says that console gaming is cheaper than PC gaming. On a console by console basis, sure thing, but not in the big picture. I only want to play a few select games, but they’re all made for fucking different consoles. Had to buy a DS to play Pokemon 4th gen. Had to have a PS2 to play ToTA. Had to have a Gamecube to play ToS. Had to have an XBOX to play ToV. And now you’ll have to have an XBOX or a PS3, but that doesn’t really make things much better.

All that shit adds up. $100 for a DS, maybe $100 for a PS2, a fortune for an XBOX and a fortune for a PS3. And the cost of the games themselves on top of that. My desktop at home cost about the same as a PS3 at retail, and a decent GPU would only add about a $100 overhead. And of course, your PC can double as whatever the hell else you want it to do, while your consoles are just that. If you got a notebook, it’s also portable.

This doesn’t sound very angry because this is not fall of 2008 when ToV was released exclusively for 360, so I’m over it for now. But in general, for people like me, consoles suck.

Anyways, the illustration itself is pretty typical of what I can turn out these days. That’s fine and kinda bleh at the same time. The lineart is fairly good but it’s still got some quirks. I feel like I really could have put a linear increase in quality with the whole piece with an exponential amount of time spent, but I obviously didn’t do that and I feel bad about it. I feel like I could actually push the envelope on several of these pieces, and just don’t do it, which makes me feel bad.

This piece in particularly was finicky going through color adjustment. Essentially my E6400 and TC4200 display colors a bit differently, and while it isn’t really a problem usually, the extreme black and extreme white here seems to have done something such that this one looks significantly different on both screens. So depending on how your display is calibrated, you should see this one fairly differently.

In the interest of time, that’s it for now. Have a nice day. 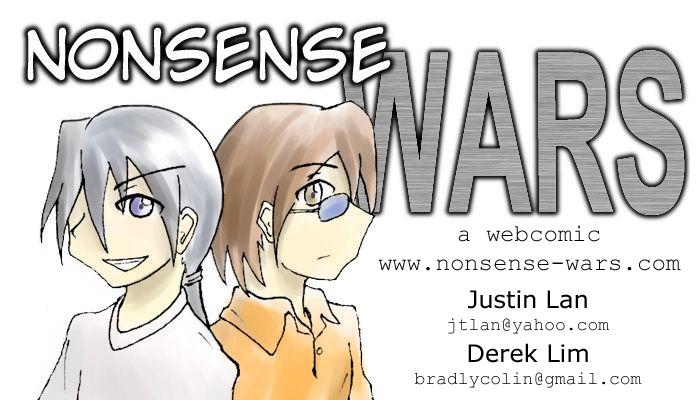 [5/13/2009] So, neither of us updated last week. Whoops. My excuse: I had two different projects due: A flash game I was making for one class and participating in a teleoperated robotics contest that is the predecessor of the well-known F*RST R***tics competition. Also, my computer suffered some sort of error making internet unusable, so I spent much of last week fixing it.

Anyway, today’s update is the Nonsense Wars “buisness” card we’ll be handing out at Fanime this year. I designed it with an eye towards the old site header bar:

We’ll probably have to play with the colors to get it to print properly. Also, I had to fake the metal effect on the “WARS” (Derek ran a filter last time, apparently), so it’s a bit different. Still, I like the composition and the way it turned out. I think I’m improving a bit with respect to coloring in OpenCanvas. Which is helpful, as I’ll need to turn out a few more colored works before Fanime rolls around…