Deep within the recesses of the Nonsense Wars archive was discovered a script for the “director’s cut” edition of Sandstorm. Besides a few minor cosmetic and theatrical differences here and there, it turned out that this edition had an entirely new ending, which is presented here as an edited production comic: 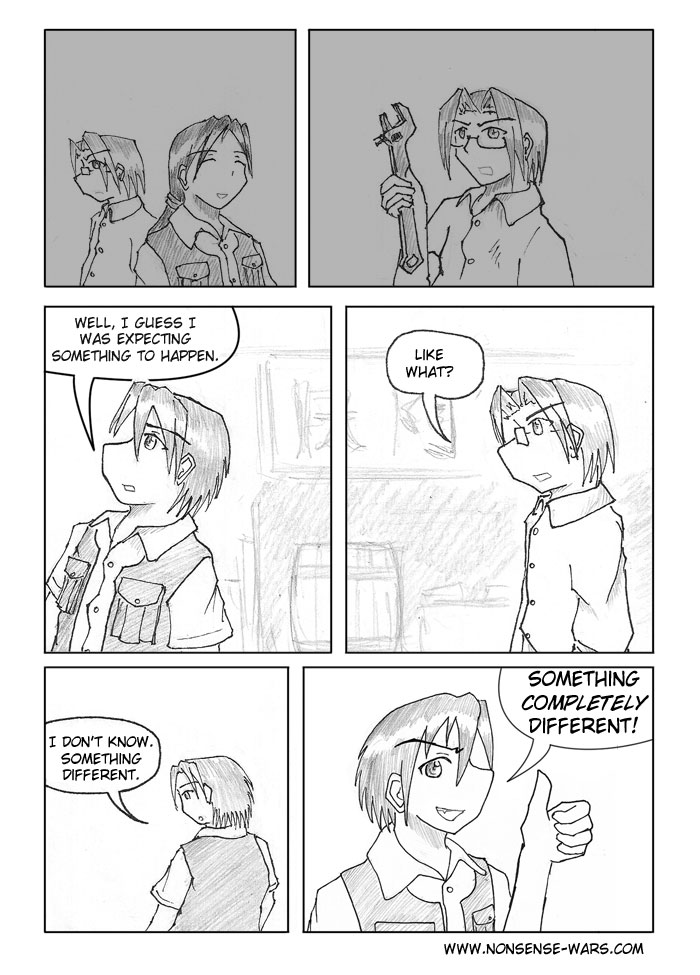 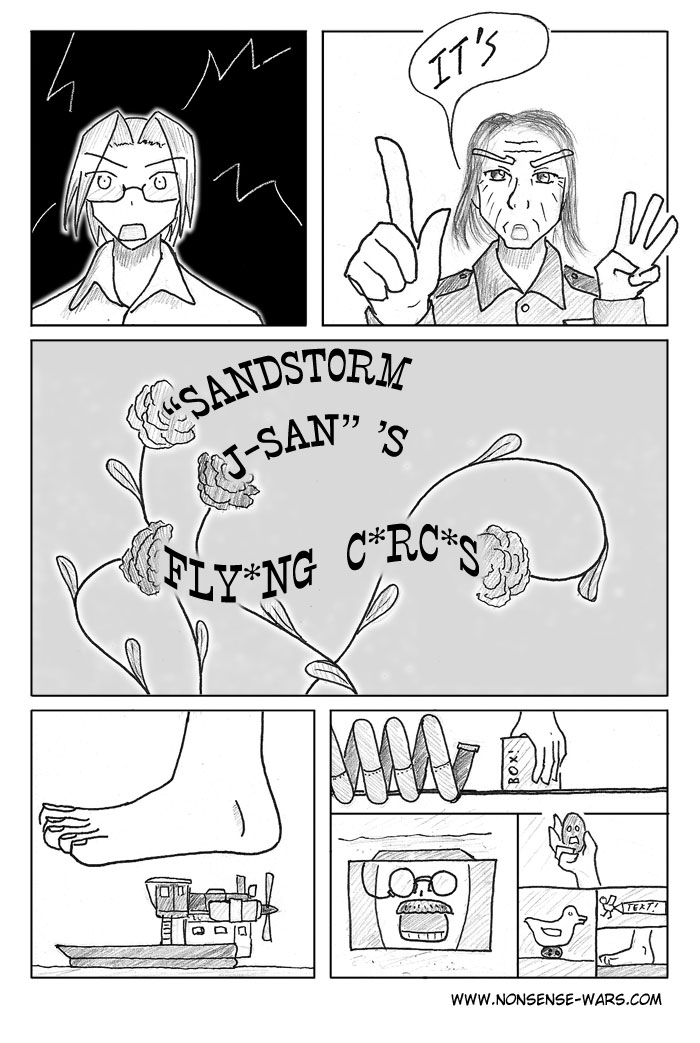 Wait a minute, what the heck?

So, lately, my computer’s been making this irritating buzzing noise I suspect it’s somehow related to the fan. Looks like it’s time to take it in for an investigation…

Just to be clear, today’s update is not a director’s cut. It’s just some silly self-parody. As I said last time, I had planned out the lines of the last few pages on paper (okay, in notepad.exe) before starting. One of the iterations of the dialogue was:

And of course, all of a sudden the images you see above came unbidden into my head. Hence the update.

Wow, I beat Derek to the update. Amazin’. 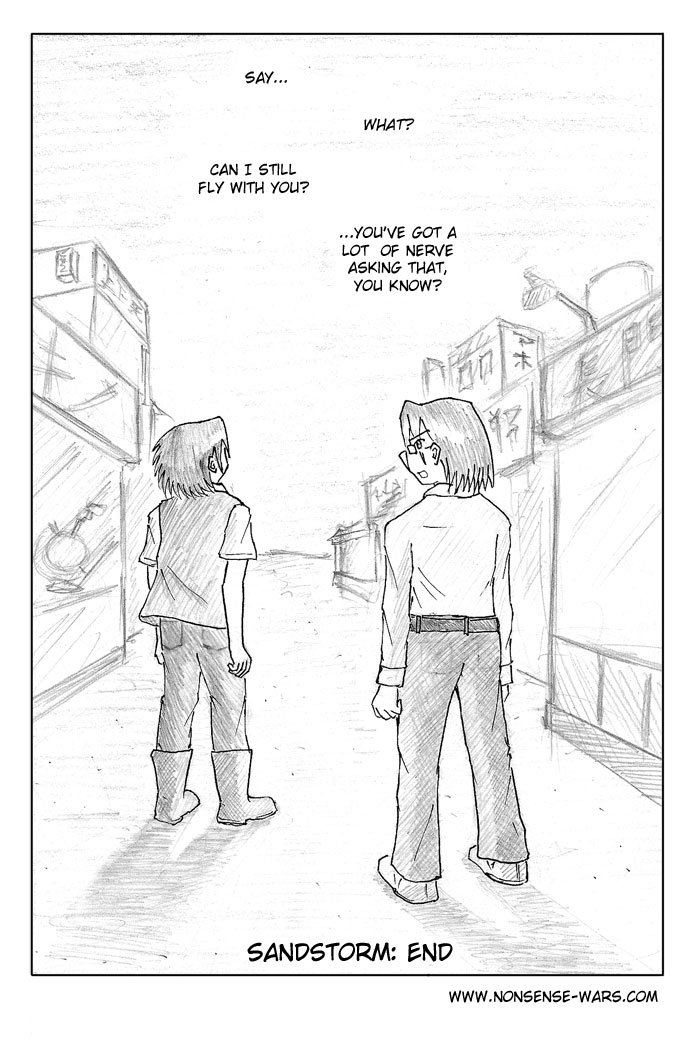 Today, there were a whole bunch of Guy Fawkes masks (the type from “V for Vendetta” pasted over various pictures and posters in the hallway (example). Figures.

nNyway, the final installment of “Sandstorm” has arrived. Sorry about the weirdness of it all. Let me try to explain:

“Sandstorm” was intially going to be a parody-type thing of those “alternate universe” mini-stories, like those RPG-based ones from Megat*kyo. Hence, the first installment was titled “Alternate Universe Rodeo: Sandstorm”. But then, for some reason I don’t remember, I decided to take it in a more serious direction, with only a vague idea of where I really wanted to go with it. (Actually, it seems that normal N-wars works that way too. Hmm.) So, bascially, we get incoherent elements such as “Sandstorm J” ‘s knife. (For why I’m referring to the character this way, see this entry and this entry.) It was supposed to be somewhat important originally. Spreading it out over 6 months wasn’t particularly helpful either.

Also, not planning out the plot led to a 180-degree change in direction right in the middle of drawing this comic. Until I started on the third panel, I had completely been intending for “Sandstorm J” to escape successfully. Why the sudden change? Part of it might have been due to the difficulty I was having in drawing the pose I had originally intended, but I also realized at that point that the ending I had had in mind was not going to work. Given the way this one turned out, though, I’m almost sorry I didn’t. There would have been an actual sandstorm (which, judging by the third panel here, I would have done a bad job on) and sandpunk police cars. (I was toying with the idea of a stirling– or steam-powered motorcycle, too.) The meganekko police girl would have gotten more appearances, too. But I couldn’t figure out how to work it out so that “Sandstorm J” escapes from the police cars on foot. (Granted, he’s dodging a bullet here, but perhaps the police chief is just not a good shot at that range.)

Sometime before drawing this comic, I decided to plan out the rest of the lines in the story, because if I did it wrong, I would give the piece the wrong tone. I’m not even sure how to describe what I was going for here. Part of it was trying to leave the true nature of the reactor’s origin abmiguous — I may have overdone this part a bit. I can say, though, that I had originally (before the part where I pulled a 180 on the plot) been intending for the reactor to have been placed there by someone else. Now, even I’m not really sure exactly what really happened. It’s like the story’s been detached from my influence somehow.

Or perhaps I just didn’t feel like making up my mind? 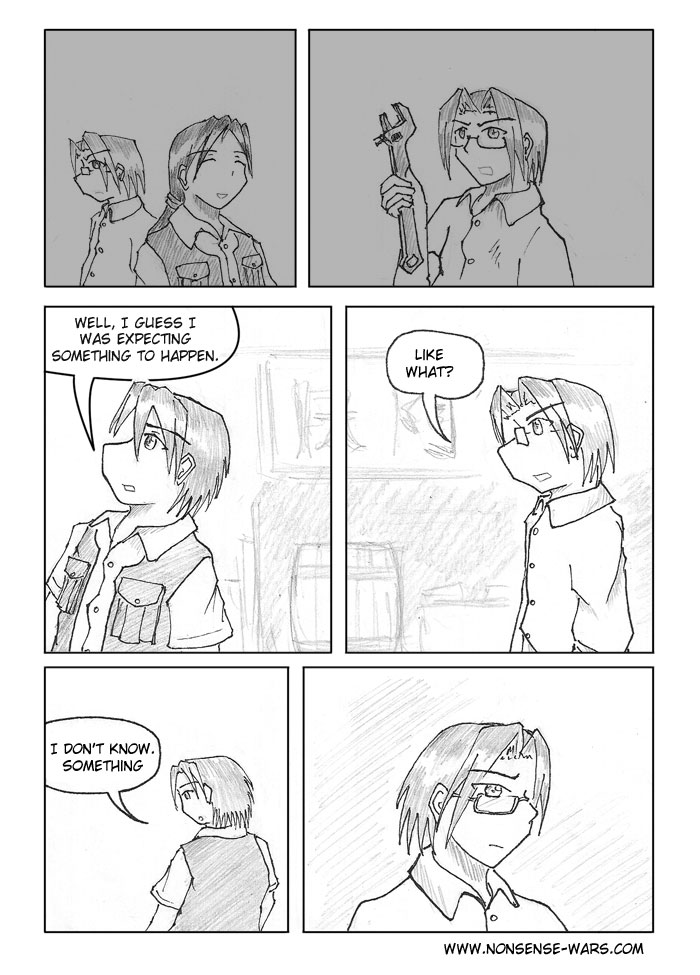 This comic was another rally run, basically drawn in 1 hour of sketching yesterday and then 2~3 hours of inking and shading today. I’m not sure how come I keep doing this now. Probably it’s not intentional. More like me waiting till the last minute.

Just had to go fix a typo in Derek’s comic. There’s a typo in his rant too, but I can’t be bothred to fix it now. Ah well. 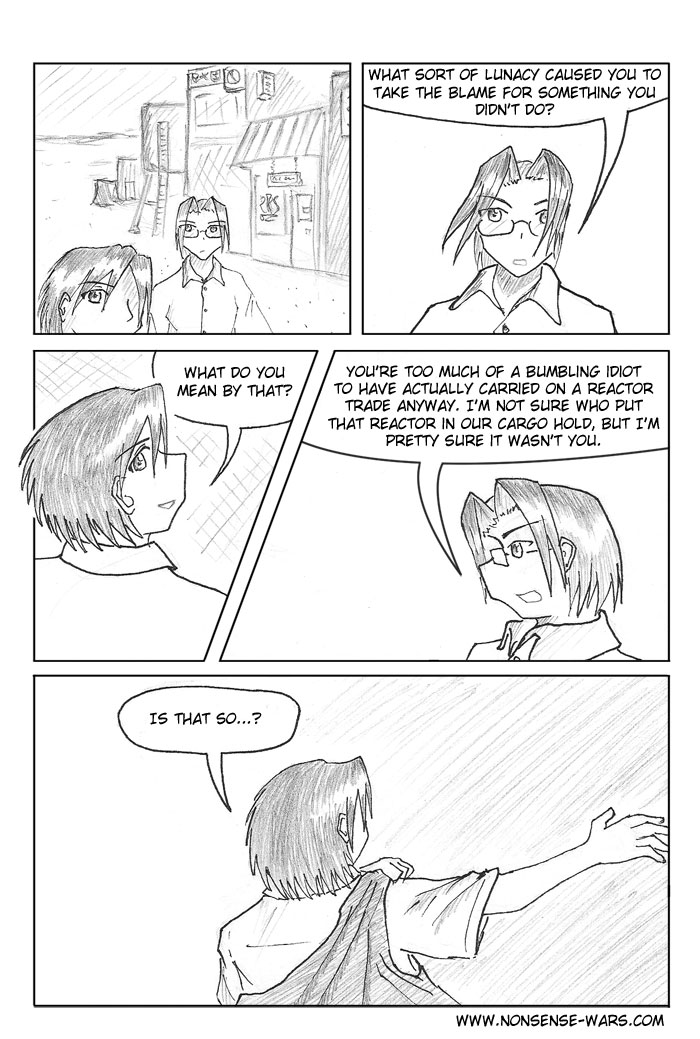 Happy Mole Day again, everyone. (I hadn’t realized this before I started writing this rant.)

So, on the topic of random junk that’s happened: I’ve built an “ion motor” in my room. Sort of. Basically, it’s an S-shaped paperclip balanced on another paper clip. When you

Where did you get a high-voltage power source, you ask?

Why, almost every house these days has one.

I also participated in a cardboard boat race. This is not as dumb as it sounds. We were allowed to use waterproofing lacquer/paint and caulk, so you could actually make your boat waterproof. Our team took first …

In vertical speed. We left with the “Titanic Award”. Ah well, such is life. Picture of boat here (with (obscure) meme!).

I hope it’s clear that “J” is putting on his vest in the last panel. (Like I said last time, the characters aren’t actually named; “J” is a convenient way of referring to him, though.)

EDIT: LOL @ Derek spoofing panels from some of my older comics. GG, dude. 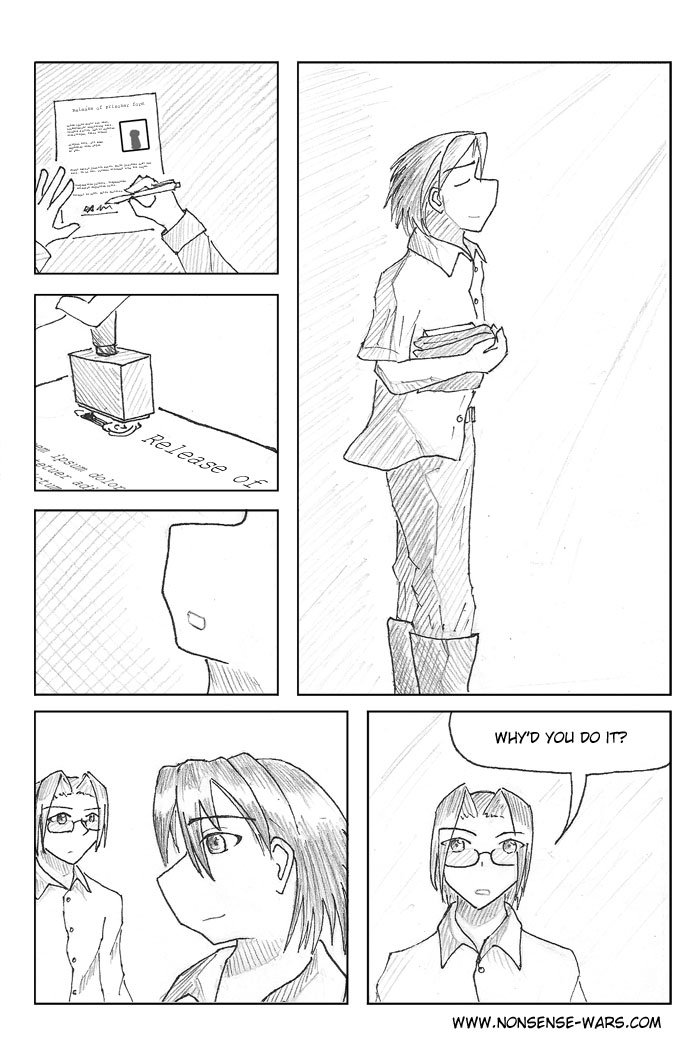 Originally, I was going to post something else. But then I thought, “Hey, if I hustle, then I can get a page of Sandstorm done, and then I can keep up a chain of Sandstorm updates again.” So today’s comic was done in less than two days’ time. Whee.

Recently, one of my textbooks fell off my shelf, hitting my poor computer and dislodging the “delete” key. Now it doesn’t really stay on, so it’s kind of a bummer when I go over there to hit it and wind up pushing this random rubber point instead. I guess I’ll either have to fix it or get used to it.

I finally caved in and bought a 4H pencil, as discussed back in this update. There were no 6H pencils in the store, so I setteled for 4H. This was probably a good idea as the 4H is pretty darn hard already, and I don’t want my art to be too invisible.

Another alternative would be to use “J” and “D” as initails for something else. I’m still not sure what’s wrong with keeping the original names, but whatever.

Or he could do what I’m doing for Sandstorm, which is basically to avoid mentioning the character names at all. (How many of you noticed?)