What? She’s a demoness, isn’t she? And a superweapon on top of that…

The bag Sam’s holding was bought back in this comic. Also, tied-back hair really looks like short hair from the front. Hence the sometimes unnatural behavior of Sam’s ponytail to make it visible in some panels. Sigh.

459! This update actually being written on time! (as opposed to early XD)

So. There is absolutely nothing special about today’s comic. At all. Therefore, I have absolutely nothing to say about today’s comic. At all. Over the break I drew 477 and 478, but they were both pieces of crap, which is somewhat unfortunate. Too much time got taken up for the car project and other odds and ends, whose status ensure that I will have plenty of entry material for the coming weeks.

Anyways. This entry is being written at dinner on my old laptop whilst I am eating my dinner. Sadly, it may be the last entry being written on this computer. My TC4200 came in the mail today and will begin some real roadtesting tomorrow when I start classes for spring quarter; if it lives up to my expectations I’ll reformat and retire the 500m at the end of this week.

I’ve been playing with the TC4200 for all of the last five hours and my thoughts have largely been positive.

This TC4200 is around two years old, assuming the memory (which is timestamped) was not replaced within the machine’s lifetime. I bought it from an ebay seller in Canada for what I think is the relatively small sum of $450 USD. An X41T, as I have said before, would have cost me $600. The TC4200 has a 1.733GHz (technically that should be .733 repeating; fractional bus speeds ftw) Dothan Pentium M 740, 512MB of DDR2 533 (also repeating) memory (actually a downgrade from my 500m which currently has a full GB), a 40GB 5400RPM drive, 12.1″ screen, blah blah blah. Physically, it’s an interesting change for one who has only used a long line of Dell.

When I first powered the thing on, the fan kicked in like a bitch for a couple seconds (I really hate how some desktop graphics cards and motherboards do the same thing; it’s really annoying) before it loaded into Windows in about a minute. The BIOS on this computer is a piece of junk; it’s very poorly layed out if you ask me. Dell’s more recent BIOS iterations have been falling into the same groove, which is somewhat unfortunate.

The guy probably didn’t load the thing with an HP recovery disk, but there was still a substantial amount of crap I didn’t need in the provided installation so I spent a few minutes deleting some stuff and setting Windows to my preferred settings (I don’t have the software to do a full reformat here in my dorm, which is, again, unfortunate).

After piddling with all the litte settings and making sure basic functionality was all good (wireless, ethernet, USB, blah blah blah), I obviously flipped the screen down and tried the tablet mode. I kinda know how to use XP tablet edition having used a TC1100 and an X41T, but when you’re trying to do day-to-day tasks in tablet mode, things get annoying somewhat quickly (I guess it could just be me not used to it yet, of course).

Writing on the TC4200 is actually quite pleasant. Tablet PC edition’s handwriting recognition and correction software is usually much better than I thought, but can have fits of random which J has seen on AIM. The really big thing is that it doesn’t like interpreting symbols and it tries to correct words that it doesn’t know (like a more forceful version of autoformat/spell check). “Writing” in AIM with J, it makes all my “meh”s “men” and all my “cuz”s “out”, etc. There are also some circuitous functions to backspace or delete or insert, etc, but like I said, overall, better than I thought.

Drawing seems to be a different story. When you simply move the mouse around the screen there’s a bit of lag, like the mouse has a bit of intertia and you’re pulling the dog on a leash. I’m pretty sure this is intentional, but I have no idea how to turn it off. This lag seems to either go away or not be a bother when you write, but somehow it’s different for drawing.

Drawing performance, oddly enough, seems to vary across programs! Drawing performance is pretty much crap in OpenCanvas 1.1; it lags quite a bit and I have a hard time doing precise strokes. Paint is actually a bit better, and OpenCanvas 4 offers performance that’s not too much worse than my Intuos3 tablet. This leads me to believe this whole mess is a software problem, so hopefully I can find some way to get rid of it, if not just suck it up and get used to it.

Overall, drawing performance is a bit worse than I had hoped for. I guess that’s why a Wacom Cintiq starts at $1000. Overall computing performance is better than my 500m by default (1.73GHz Dothan should be just under 50 percent faster than my 1.4GHz Banias), so I have no complaints there.

Battery life is very impressive. I’ve had the thing browsing and playing music on and off to simulate my usage patterns in class and it’s within the fourth hour as I write this. and down only seventy six percent. This is simply amazing. I am definitely impressed. To boot, this is with a relatively high power (drawing) Pentium M and a not so energy conservative Hitachi hard drive. I could easily see 7-8 hours with the normal extended battery, maybe up to HALF A DAY with the expensive 12-cell extended battery. Those figures are simply incredible.

It’s not as light as I would have hoped. Then again, four pounds must just not be that much lighter than 5 pounds, since 5 pounds just isn’t that much lighter than 6 pounds. Then again, I went to the Stanford bookstore today and picked up (pick up as in physically pick up, not as in purchase or anything like that) a Lenovo X300 and a Macbook Air, and holy crap where they light. And thin. I don’t like Macs, but holy cow that thing is an impressive piece of engineering.

At this point, the TC4200 has just gone into standby (at 5 percent battery) just under its FOURTH HOUR.

So. Pictures. You can see the size difference between the TC4200 and my D830. This is the first ultraportable class machine I’ve owned; the D830 is considered “mainstream”, though the D830 is a bit lighter than most lower-grade 15″ machines. On the other hand, I think the TC4200 is heavy for its size. It’s also pretty thick with respect to say, the XPS 1330 or a Sony TZ (or is that SZ? or ST? Goddamn you Sony and your queer numberiing), but to someone who started with a 6lb 14″ laptop in 2002, it’s pretty darn small. Sorry if the pics load slow. Comcast seems to have throttled my up bandwidth even more…

That’s it for now. 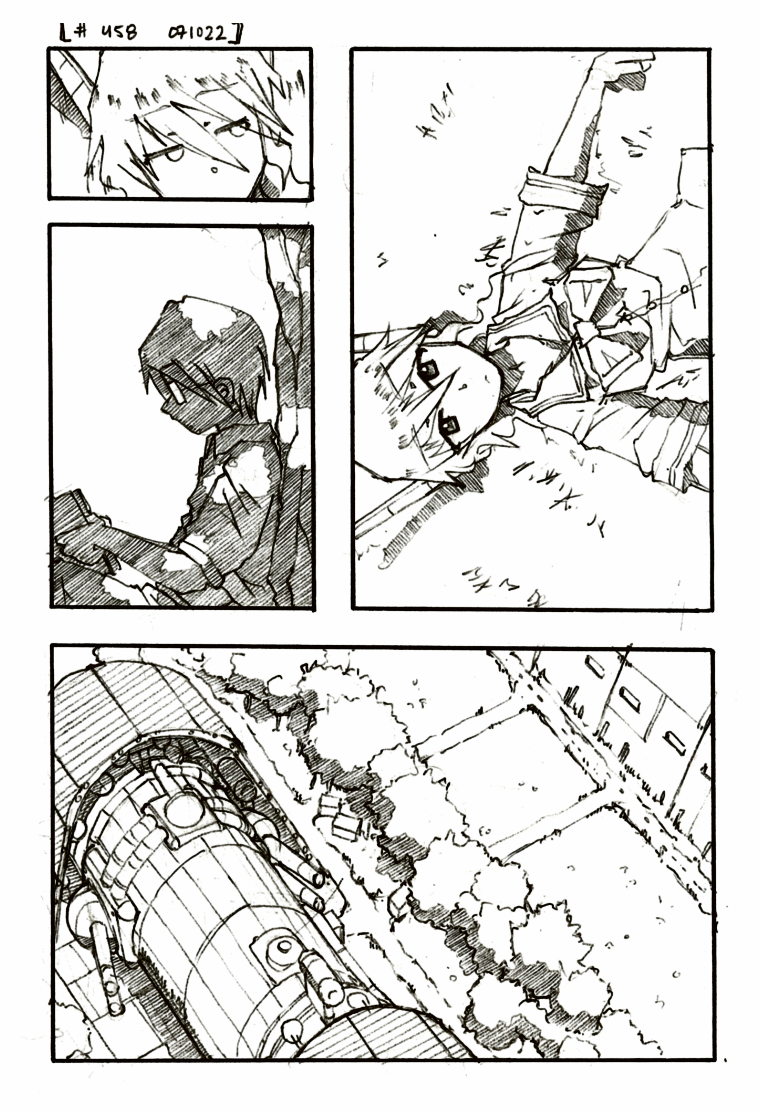 WELL. Spring break time again; time to try to do a significant amount of drawing while I still can. Honestly, I’m surprised I’m still a good seventeen comics ahead of the site; it implies that after my september rush I’ve been able to keep drawing an average of one comic a week, which, historically, seems to be pretty amazing. Then again, I did put up illustrations and stuff on the weeks that I did those, so the actual number should probably be closer to twelve or thirteen.

The pages near the end of part five turned out to be pretty crappy; I think I was probably just rushing to get ’em done. I tried to start doing all the comics by tablet, but it turned out to be too difficult and/or too time consuming. There have already been two examples posted and there will be two more (slightly better?) examples coming along down the pipe. It might just be that I’m trying too hard to keep things clean on the tablet; I should conceivably be trying to aim for paintchat quality rather than anything significantly higher.

But let’s save that ’til the actual comics come up.

SO most of the anime I’m watching is actually wrapping up now. In fact I don’t think that anything I’m watching this season is going to carry on into the next season. This is the first time such a thing is happening since Hayate started airing a full freaking year ago; I will actually have ten series ending at once which is pretty insane. H2O actually ended with episode twelve just this week; I think Aria the Origination or Hayate is the furthest behind.

Subseqeuntly I took the time to do some electronic spring cleaning. I already deleted a whole ton of stuff about a week ago, so now it’s just a matter of archiving files onto my 500GB archive drive. Loaded about 3GB of data on there today. It used to be that I’d take these breaks to do a reformat, but with XP you really don’t need to clean out the crap too often. Once a year is probably good enough; my D830 has been clean since July. It’s getting a bit slower but there’s only another quarter to go.

I take a special effort not to do anything queer with the D830 since it’s my main machine at least 75% of the time (Colette and the 500m probably share the other 25% equally) and I don’t have the utilities to bring the system back up if anything super-bad were to happen while I’m working at my dorm. It’s good that it’s a pretty new machine as I can put a lot of crap on it without it bogging down too much.

Speaking of bogging down, I got to try using an X41T the other day. The actual tablet part is really nice; there’s actually a noticeably greater amount of feedback than on my Intuos3 which I think will be really good for drawing. The only problem is that the hard drive really does make it slow as hell. On a relatively old 40GB/5400RPM drive I can get boot times under a minute on my 500m; the X41T takes more than twice the time. And I could upgrade that 40GB/5400RPM unit if I wanted to which isn’t possible with the X41T.

Sadly the 500m may finally be seeing the end of its days; I finally bit the bullet and purchased a tablet PC from ebay last week. It’s not a TC1100 or an X41T, but a TC4200. At $450 I honestly think it’s a steal; the C840 I sold recently netted $350 so I’m essentially getting this thing for $100. Plus shipping of course. With all this ebay stuff, the postal services are the real winners.

Sadly, it’s shipping from Nova Scotia, so it probably won’t be here ’til the end of the week. That’s rather unfortunate as I’d like a bit more time to play with it before going back to school; if it’s a satisfactory unit, I’ll probably retire the 500m. I honestly hope that’ll be the case; I think having a screen to write on will help transition to tablet drawing in the longer run…

Anyways, that’s all for now. Tired and going to bed. 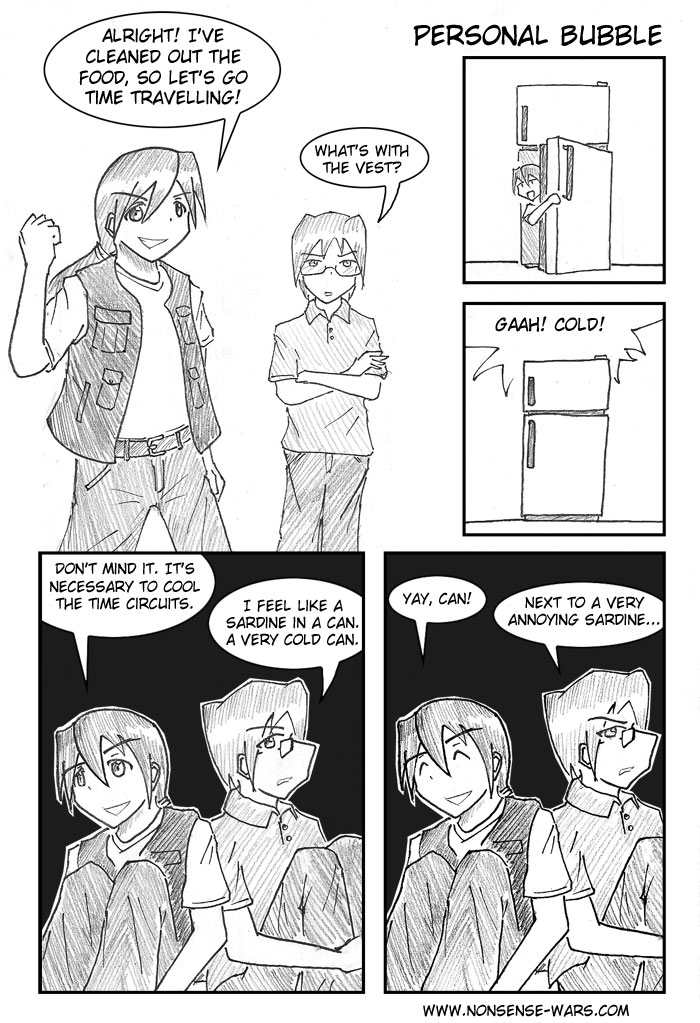 I like J’s pose in panel 1, and his expression in panel 2 (despite it not being quite the right expression for what’s going on). Oh, also, sorry the comic is late. I was really busy last week and this weekend.