Once upon a time I exclusively drew non-figures. Some time ago, many things happened and everything else took a back seat. There’s been some resurgence in non-figure stuff, but that’s all they’ve been – resurgences. Despite some recent paintings of which I’ve been fairly happy, there’s something that’s quite lacking.

Well, that’s all the other stuff that’s kind of been sitting on the back burner for the last many years.

The quality of figure drawing and painting has, despite all my gripes and all, gone up over the same last many years. A good quick comparison from d280 spans 2003 to 2009. On the other hand, scenery is still scenery. Admittedly this isn’t quite as fair a comparison since quality in the comics is somewhat lower than the local max, the last time I painted something non-biological was never (well, I suppose there’s that traction engine, but I can’t find it), and the last time a ‘resurgence’ happened was in 2006.

It’s not like there’s been no gains whatsoever, but it’s been paltry compared made to the gains in figures.

What I want to do now – and this really is a want; I don’t actually know how far or how close this is from happening – is to get rid of the divide between figure and non-figure and just have ‘drawing’. I don’t really know when this divide happened – it wasn’t always there; I think there are old paintings that do a good job integrating everything – but I haven’t really been able to do anything recently where both the foreground and background both don’t suck. I’ve been using ‘background’ and ‘foreground’ and ‘figure’ and ‘non-figure’ kind of interchangeably largely because I’m not even that sure myself of what I’m talking about (as usual).

Anyway, I’m trying to go back to my roots – non-figures with a focus on the details. This is the second in what may or may not be a series of many. This is probably the first full-pencil job I’d consider ‘finished’ that I’ve done for a long time now – the first such piece that wasn’t for a class (I’m discounting the work I did in ART140/141 in 2009) in even longer. I actually don’t think it’s half bad.

So, since D posted a color work, I figured I should too. I actually drew this way back in May, and for some reason never posted it until now. Behold, MIKURU BEAM! 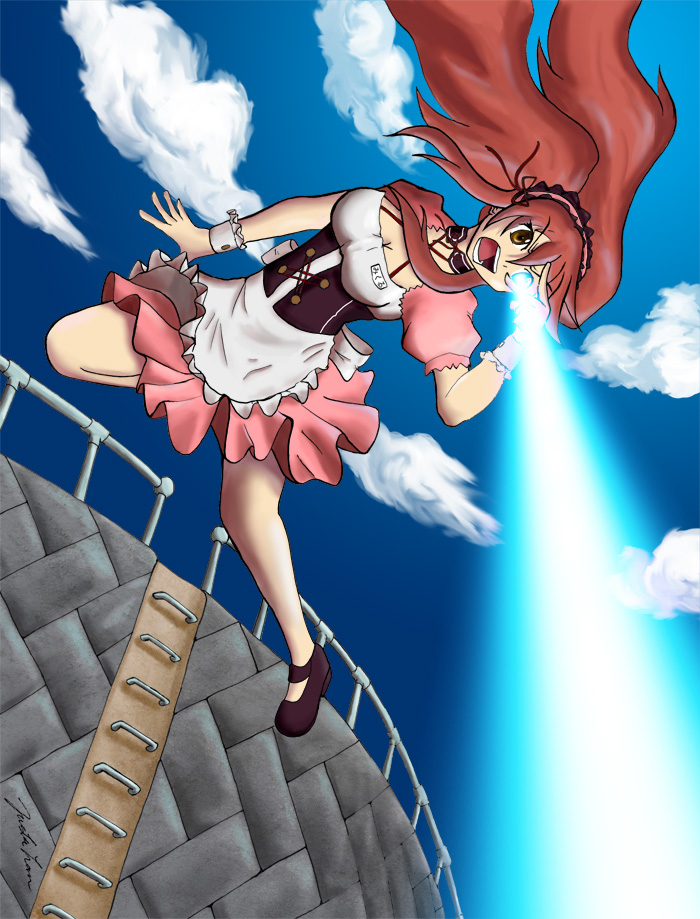 This picture was inspired by this absolutely awesome cover of Koi no Mikuru Densetsu, the opening song to the “first episode” of Suzumiya Haruhi no Yuutsu. (The cover is actually a pitched version of a NicoNico singer also known as “J”. Sadly, it’s not me. Here is a non-pitched version (no, it’s not actually by X Japan).)

And now, a how-it’s-made, because I think the process is somewhat interesting, and D has done some of these before.

END_OF_DOCUMENT_TOKEN_TO_BE_REPLACED

It looks like we’re falling into a cycle of like “update every 10 days” or something. As long as it’s consistent, I don’t really consider it that bad a thing… but I haven’t had any time to draw in like forever. School sucks. Page 15 of Pieces. I want to at some point set up an easier way to just view the comics, etc, but I don’t really know how I’m gonna do that… 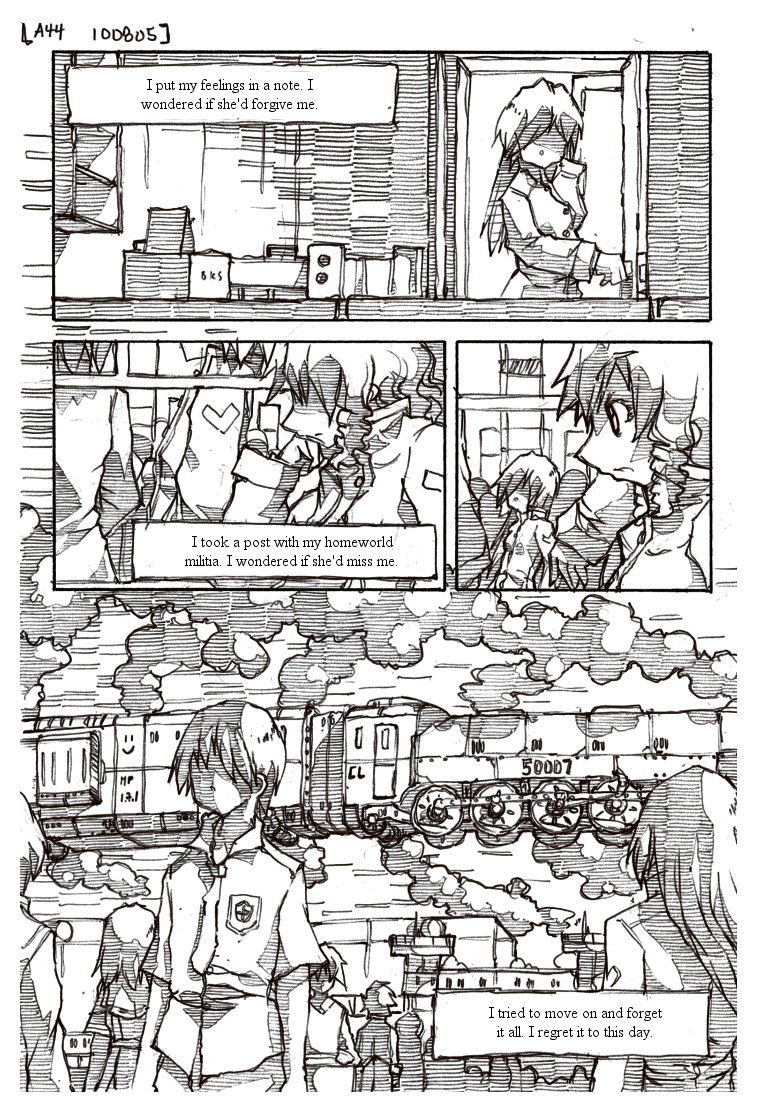 Recently we’ve (myself, J, and the one and only generalachoo) have been playing a bit of Yugioh. Yugioh gets revived like every break, though we generally stick to the same antiquated card pool, though it’s chill that way. I do agree that it’s nice being able to use shitty cards and still be “competitive” within our fairly limited metagame. For the first time since I started doing YGO, I’ve gotten card protectors other than my stalwart UltraPro ‘Dragon Red’ sleeves.

They aren’t that good as sleeves… J says it’s more like “character merchandise that doubles as protectors”, or something along those lines.

We’ve also been playing with an old building toy called RokenBok. There was a period when me and my younger brother played with this a lot, but like all toys it got shut away in some bin after a while. J and I have been going through bins and piddling around with old toys (Tomy trains for one), so this naturally got onto our ‘to do’ list. I think the way we build now (for Tomy trains and for RokenBok) is drastically different – well, obviously, I suppose – than the way way I wouldn’t built this stuff when I was kid. I feel like my old mantra was “use any many of the pieces as possible”, but nowadays we just go rando or by theme. Maybe more on this some other time.

Cue our masterpiece, the “Spiral of Doom” (J’s name).

I have a problem set class this quarter for the first time in a while. Back in freshman year, I was throwing away a bunch of scratch paper trying to figure some of the stuff out, and I figured there had to be a better solution. Sometime in sophomore year I started doing problem sets on tablet and printing them out – so you can “throw away” scratch paper without doing anything – though by that time the problem set classes were already declining. I just wanted to say that I feel hella pro when I do problem sets digitally. Just like I feel hella pro when I talk on the phone with a headset.

This was a random 4koma idea I’ve had sitting around since who-knows-when. The professor is just a throwaway character, but he sure was fun to draw.

Also, gonna leave you guys with this rather smoothly fan-animated video.

As I said before, 2nd update in less than seven days, and today’s update is another painting.

My family visits Hong Kong every winter and this year was apparently no exception. On the flight east, I watched ‘Inception’ and, surprise, surprise, ‘Disappearance‘ for the second time. In kind of the same way Yuki 2010 came out of my first viewing, today’s painting came out of my second viewing. The other half is that I wasn’t very happy with Yuki 2010. I’m not that happy with this one either, but I do think it’s better. Mostly.

The drawing and painting approach here is similar to that of Misaka 2010, but rushed a bit more. I tried to ‘soften’ the paint job a bit, and as a result, there’s a couple sections on this painting I like a lot… it’s just that I don’t like the whole thing that much. The lazy backgrounds are photos I shot myself, with my Droid X camera, in Hong Kong. I don’t actually know what the buildings are nor exactly where they are, but they exist.

This next tidbit is classic. And when I say classic, I mean classic.